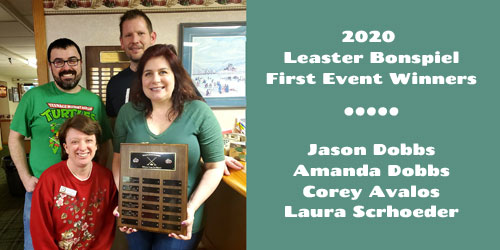 The 6th annual Leaster Spiel was held on February 8th. Before I tell the tale, I want to thank the volunteers that helped make the event a success: Kelley Burian and Marta Conlon for their kitchen help as well as Bridget Bolsterstein who shared some delicious homemade desserts. Also, Paul Fischer was kind enough to come to the club just to open the bar. Laura Schroeder double dipped by helping with shopping/meal prep and then curled in the event.

Now to the dirty details:

As you may know, the goal to force your opponent to score more than you because "Less is More" if you want to win. There were only a couple blowouts and both losses were experienced by the same team resulting in the Dropp Rink taking home the "Biggest Loser" award with a chartbusting 27-point total. Better luck next year, Sue!

For the curious: The 2nd event finals was an unusual game in which the Davis Rink was shutout by the Toman Rink. Rules require the winner of a Leaster game to score in at least one end so Toman and company took the win despite scoring more points.

Winners of the three events and hardware:

Look for the 1st Event nameplate on the updated Leaster wall plaque in the next week.

Good curling and see you next year!