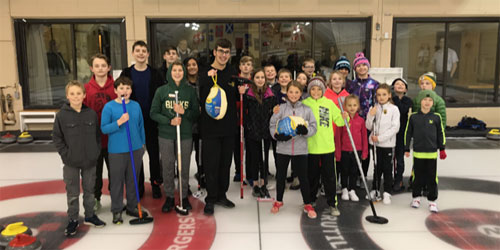 We got the idea from Jason Dobbs, and the concept is pretty simple. The Junior curler who delivers their stone closest to the frozen turkey, after all the participants have delivered their stone, takes home that turkey. It's possible during this process that the turkey may accidentally get moved by another stone — putting someone else’s stone closer — though we asked for only draw shots, as we wanted the turkeys to go home in one piece.

We divided the Juniors up into two groups: teens and up and pre-teens, with approximately fourteen juniors in each group.

The younger group of Juniors were drawing to a turkey on the button of the Junior house, in the middle of Sheet One.

The Junior crowd roared at this sight. Lucille asked her sister why she moved her stone, she said, "They were telling me to move it," so she did. The turkey did get moved a few more times, and Lucille’s stone was still in contention, but Maya Zimmerman’s stone ended up being closer without any measurement needed. So, Maya Zimmerman went home with a 11.4-pound frozen Butterball Turkey.

On the teen side, the turkey was placed on the centerline, by the coins in front of the Sheet Three's house.

Ethan Dorr needed to leave for work, so he went first and drew to the top edge of the button in the house. So, there was room for improvement from the rest of this group to get closer to the turkey. With all the excitement on the ice floor between the two sheets, I believe that Clay St. John went second. His stone froze to the front edge of the turkey.

Several stones from this group were trying to move Clay's stone away from the turkey — several came up short and some too far away. But several Juniors stones (including Devin Dauphinais and Joseph Dobbs) did move Clay's stone and the turkey in the same direction, still keeping Clay's stone the closet with no measurement needed. Clay St. John went home with a 15-pound frozen Butterball Turkey, grinning ear-to-ear. 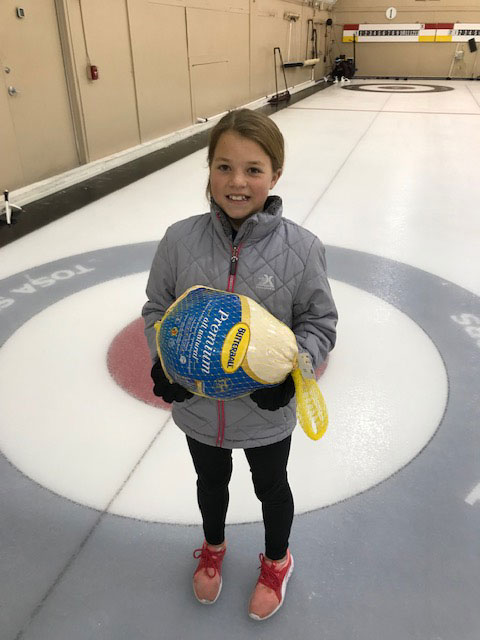